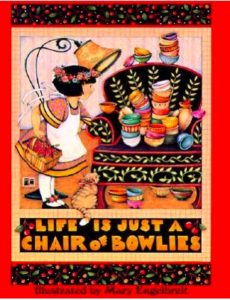 You may have your own definition. Regardless, each one of us can experience hardship that elicits complex emotions. Life isn’t, as Mary Engelbreit suggested in 1992, “just a chair full of bowlies.” And pity parties accomplish nothing good.

You may have concerns about thieves breaking into your home and stealing precious things . . . family mementos, safeguarded coins, antiques, heirloom jewelry. Installing dusk-to-dawn, motion-detecting outdoor lighting; deadbolt locks; and security cams may thwart would-be burglars. But thieves come in many forms. Such uninvited pirates may show up at any time of the day or night to rob, bit by bit, our . . . health.   The nerve!   What have I hit on?! ALS ruins nerves! What does that look like for a victim of speech-onset ALS? A few personal glimpses:

Jon often reminds me to be thankful for what I still have left. Pivotal. Otherwise, it’s tempting to wallow in what I’ve lost.

Please thank God today for your many unearned blessings. And when you take a bite of that In-N-Out burger or turkey thigh or pumpkin pie, chew and swallow it, be grateful. Something as seemingly insignificant as that shouldn’t be taken for granted.

So glad you’re here! Heartfelt appreciation to our daughter and son-in-law, Laura and Jarrod, for sharing their expertise in designing this website from their home in Chattanooga, Tennessee.

Thank you for your concern expressed through emails, texts and cards and for your prayers. An appreciable decline in stamina makes it difficult for me to keep pace with individual emails and text messages. My hope is you’ll return here for current news and personal reflections. You’re welcome to email or text me but no promise you’ll receive an individual response.

END_OF_DOCUMENT_TOKEN_TO_BE_REPLACED

A person with ALS usually presents with problems in dexterity or gait resulting from muscle weakness, or with difficulty speaking or swallowing. Sphincter control, sensory function, intellectual ability, and skin integrity are preserved. Patients become paralyzed and often require ventilation and surgery to provide a new opening in the stomach (gastrostomy). Loss of respiratory function is ultimately the cause of death for people who have ALS.

Incidence and Prevalence of ALS

Approximately 30,000 patients in the United States currently have ALS. The disease has no racial, socioeconomic, or ethnic boundaries. The life expectancy of ALS patients usually ranges from about 3 to 5 years after diagnosis.

ALS is 20 percent more common in men than in women. However, with increasing age, the incidence of ALS is more equal between men and women.

Once a motor neuron degenerates completely, the muscle that it controls no longer receives impulses from the brain. Approximately 60 percent of ALS patients experience muscle weakness and stiffness as the initial symptom.